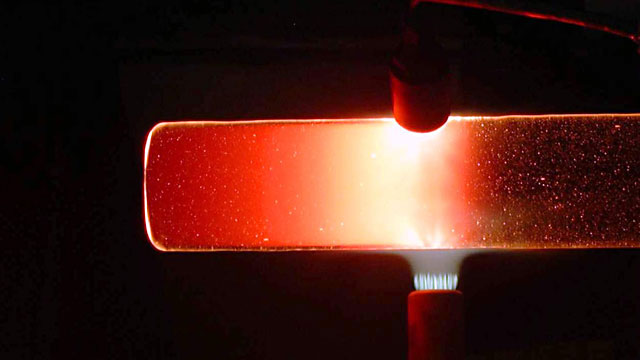 We have a number of customers around the world who use our Quartz ampoules and crucibles for Crystal Growth research and production, such as the semiconductor industry.

Why Quartz Ampoules? Unlike borosilicate, Quartz is used because of its high purity and can also be exposed to much greater temperatures. We use material such as GE214 and GE224, as well as HSQ300 and HSQ900, from Momentive and Heraeus respectively, depending upon customer choice.

Before I started Sandfire Scientific, I first manufactured Quartz ampoules in 1966. I set up the Lab for the Chemistry Department at the University of Hull in England. They began to grow Crystals. A whole lot of ampoules and crucibles later, Sandfire continues to advance the art, and science, of manufacturing Quartz Ampoules. We manufacture Crystal Growth Ampoules that measure anywhere from 6mm to 130mm ID with lengths up to 800mm. When it comes to Crystal Growth, larger is sometimes better. Large Crystal ingots produce larger wafers from which more “chips” can be fabricated, as an example.

We can take a quartz tube and vacuum shrink it the entire length to give it a taper and to consistently produce ampoules that are within tolerances. The end result is a product that is very precise. To not leave anything to chance, we also machine our own high density carbon formers.

And depending on the end-process, we can add a layer of pyrolyzed Carbon. The carbon layer  acts as a barrier between the material introduced in the ampoule and the glass itself, thus facilitating the removal of the ingot, and the reuse of the ampoule. The carbon further helps in retaining water and oxygen impurities. The method of carbon coating we have developed is far superior and takes much less time (saving you money) than the traditional 3-step method of “baking” carbon in an ampoule using an oven. Light, medium and heavy layers of carbon can be applied in our ampoules depending on the client’s preference.

We strongly believe in technical advancement through research and development.  Customers in the USA, France, South Korea and Turkey who purchase our Quartz Carbon Coated Ampoules on a regular basis confirm that we are on the right track when it comes to manufacturing Quartz ampoules and the technique of vacuum shrinking and carbon coating.

I invite you to contact me regarding how Sandfire Scientific can help you with your projects requiring Quartz Ampoules, or any other custom-made scientific lab glass. Sincerely,