It takes a special kind of person to stand or sit at a bench or lathe for hours on end and to work mainly with borosilicate or quartz glass. Unlike soft glass, they require a higher melting point. Especially large Quartz tubes, where more than one torch spewing 3200 °C, is typically required to shape the material into the finished product. 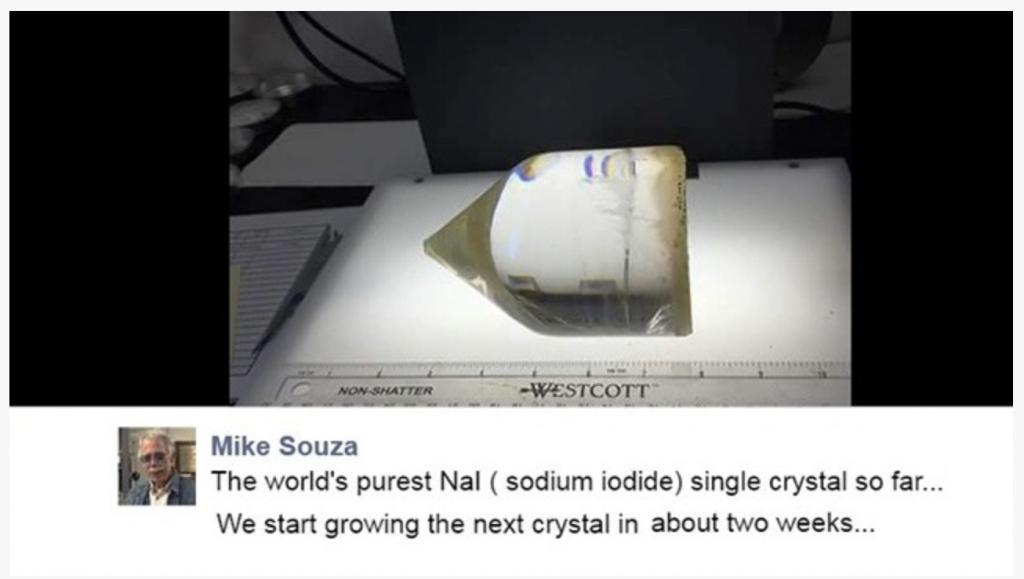 One such person is Mike Souza, Scientific Glassblower at Princeton University. Souza is arguably one of the more technically knowledgeable glassblowers in the America. From time to time, Mike Souza and Richard Morgan, owner of Sandfire Scientific, collaborate on projects that require our carbon coating.

Recently, Souza posted some very complimentary words about Sandfire on his Facebook page entitled Princetonglas. You are making us blush, Mike. We posted one of his photos on this blog’s entry. It shows a snapshot of the Bridgman Technique for crystal growth and the comments he posted. The other is a photo he took of a sodium iodide single crystal grown in an ampoule we manufactured and carbon coated for Princeton experiment.

This particular project involves searching for Dark Matter. Which is the hypothetical substance that is believed by most astronomers to account for around five-sixths of matter in the universe. Overwhelming evidence suggests it is an invisible substance thought to bind galaxies together through its gravitational attraction. However, its direct detection has proved to be illusive by conventional techniques, as even the lowest level of radiation or electromagnetic wave can mask its signal.

The most promising hypothesis is that at least some of its mass is composed of WIMPS (weakly interactive massive particles), which pass through the universe and our Earth. Occasionally they should bump into an atomic nucleus. If sodium iodide crystal is used as a scintillator, this incident should produce a flash of light if this happens with in the detector.

The SABRE (Sodium-Iodide with Active Background Rejection) Group at Princeton, headed by Dr. Frank Calaprice, is working on the development of ultra-pure NaI Crystals for detectors about to go online next year in both the Northern and Southern Hemispheres, respectively Gran Sasso in Italy and at the Stawell Underground Lab in Victoria, Australia.

So, at a time when Scientific Glassblowers are shrinking in numbers due to various reasons, such as universities closing their glassblowing shops, cheaper labor abroad, and little to no training offered in that profession, except for Salem College who do a great job, we are glad to be friends with Mike Souza. We respect his wealth of knowledge and experience and we are proud to be able to offer him assistance with his collaborative projects.

More to follow at some point on the SABRE project. In the meantime, please feel free to contact us regarding our Quartz ampoules that we can provide with a layer of pyrolyzed carbon.

Here’s a couple more comments we received from some of our customers:

I received the quartz crucibles and caps. They are great! Excellent work! Thanks.  Christopher

I’m writing to let you know we received the Quartz glass capsules and were able to fire one in our oven at 1050 C for over a day with no problems. My supervisor is especially pleased with how the process has turned out, and we have you guys to thank for that.  Jake