Pipettes and burettes, what’s the dif?

The Pipettes, not to be confused with the British Indie Pop band of the same name, are used in various applications to carry a measured quantity of liquids. They are especially useful at delivering the same volume repeatedly, although accuracy varies depending on the quality and type of pipettes. Pipette comes from the word pipe, for small pipe.

Pipettes and micropipettes come in a large variety of style and function. You’ve got your volumetric or bulb, graduated, air and positive displacements, and Pasteur pipettes to name just a few.

The Pasteurs lost 3 children to Typhoid fever. So, Louis set out to discover why and invented a type of pipette. He expanded upon the research of the Italian Biologist Lazzaro Spallanzani. Pasteur concluded that fermentation causing growth of microorganisms, such as bacterium, virus and fungus contaminated the food; thus making people sick. Although some will argue for or against pasteurization, he did help a lot of people avoid sickness.

The pipettes require some sort of suction device at the top end, like your basic eye dropper. In the early days of pipettes, the user would put the pipette in his/her mouth and draw the liquid. Where was the occupational health and safety person then? Any volunteers to draw some mercury salts?

The burettes are similar in function; however, they are usually attached to a stand whereas pipettes are hand held. The other difference is that the liquid is inserted in the burette from the top and not the bottom. Your typical burette is made up of a glass tube that has the same diameter, unlike some pipettes that have bulbs. Burettes have graduation and a stopcock at the bottom. The word burette is from old French biurete (small flask) for biur (flask) and old German; būr-hut.

You can purchase pipettes and burettes from the big box scientific equipment stores, but some of our customers require custom-made units like the ones you see in the pictures. One is a 20ml and the other is a 30ml burette for a pulp mill lab. Those particular units have an overflow top making them auto-dispensing burettes.

Pipettes and burettes are among the most widely used pieces of lab equipment around the world. 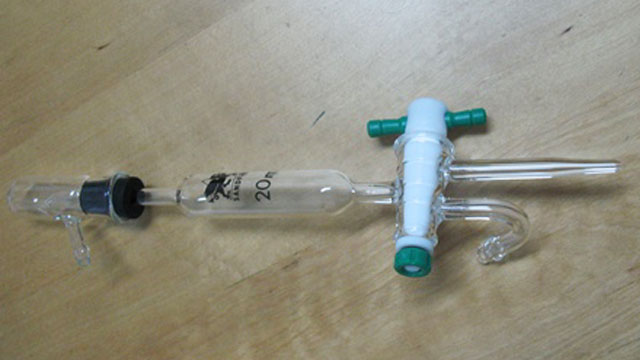