As we ponder whether we should switch our existing internet service from Asymmetric DSL using our fax line and supplied by copper wire, to a much faster mode of delivery by fiber optic, we are reminded that we drill preform rods for our customers doing R&D in optics and photonics. 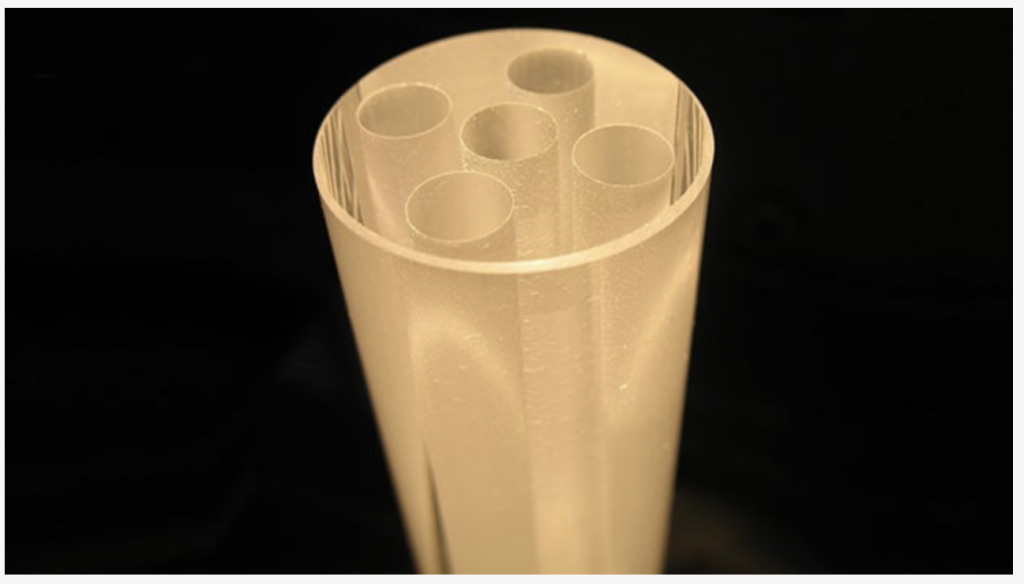 It wasn’t so many years ago that we were getting our emails by dialing up to a server using a telephone. Interestingly enough, Alexander Graham Bell explored using light to communicate. He invented the photophone in 1880 and considered it a greater invention than the telephone. It worked by speaking into a microphone. His voice would cause a mirror to vibrate inside the transmitter, and as the sunlight hit the mirror it would reflect that “vibrating” light across a distance of about 200 meters. The light would then hit a mirror inside the receiver which would cause a selenium crystal to again vibrate resulting in the sound to come out of the receiver. Unfortunately, it only worked on sunny days. If someone walked through the light signal, it would interrupt the communication. No communication was possible at night. Because of the many drawbacks, Mr. Bell abandoned the development of the photophone.

It would take another 70 years before the laser would be invented. Again, it was the same problems as the photophone. The laser beam would not work if it was raining, foggy or if there was obstacles between the transmitting and receiving units.

In the mid-sixties, researchers at the British Post Office were looking into the possibility of using fiber optics as light “pipes”. The British Post Office operated the British telephone system. Corning became involved with Her Majesty’s Royal Mail to try to find a solution to their dilemma. And so, 90 years after the photophone, Dr. Robert Maurer, Peter Schultz and Donald Keck, researchers at Corning, a company well known for their Pyrex glass, invented the first low loss optical fiber using fused silica.

There are many advantages to fiber optic pipes, or cables, in that they are easier and much less expensive to install than copper. Also they have no metallic component making them free of any electromagnetic interference. And the signal is not detectable remotely, providing for a secure mode of transport, unlike copper wire.

Looks like we will go with fiber optic internet and get with the 21st century. We continue to drill preforms for our customers involved in the field of fiber optics. Last time, we drilled six equidistant holes in a 25mm preform. We will be happy to drill your preforms.