Over the years, Sandfire Scientific has established itself as a leader in the repair and manufacture of Quartz torches, as well as Nebulizers. And Spray Chambers, either made of Quartz of Borosilicate. 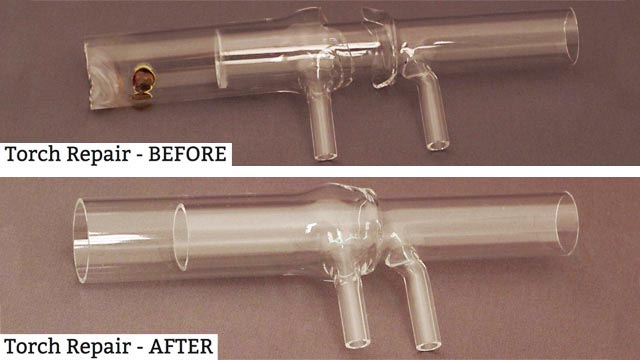 The first two photos (before and after) show a Perkin Elmer torch for an Elan 6000 series; Inductively Coupled Plasma Mass Spectrometry unit, or ICP-MS. Argon gas is used to conduct the analyses. Sometimes, the Argon flow is not set properly, or is disrupted, causing the Quartz torch to reach and exceed its softening point of 1683°C. Then, the torch becomes unusable. Quartz is a wonderful mineral that can handle operating temperatures of up to 1000°C, yet is also very fragile. The second cause of breakage is simply mishandling. The PE torch was sent to us for repair. You can see that the torch melted, and the jacket is broken in the middle. Although, it looked like the torch was ready to be discarded, we were able to repair it, and for less than the cost of a new torch. We only use precision bore quartz tubing and years of experience to come up with the final product you see in the “after” photo.

We repair and manufacture all makes of torches and spray chambers, such as Agilent, Jarrell Ash, Leeman, Perkin Elmer, Spectro, Thermo, Varian Vista Pro (last 2 photos in the slideshow)… So, whether you wish to have your Quartz torches repaired, or new ones made, Sandfire Scientific is the place to contact.