We don’t normally do beakers, but…

Our friend, Lorrie, “prop girl” extraordinaire contacted us to get some unmarked beakers and Erlenmeyer flasks for a shoot. As it often is the case in the movie industry, and much like in the Army, the rule is: hurry up and wait. We needed to manufacture the custom-made beakers and flasks and have them in Chicago within 1 week. Not an impossible task when the boss comes in on the weekend to complete the order, and to make sure that work for the other customers is not delayed.

She wanted beakers without lines or markings. We could have washed the off-the-shelf beakers and flasks with HF acid, but it wouldn’t have looked as good as unmarked ones. This was a special case. Normally, end users obtain standard flasks and beakers from large scientific labware suppliers, but they always have markings.

Tell-tale signs of the beaker, of course, are the cylindrical glass, usually made of borosilicate, the flat bottom, the lip or beaded rim and the small spout, in the form of a beak. But interestingly enough, the beaker was likely named after the Beaker people who were master pottery makers during the Neolithic period. We’re talking 10,000 BC.

Other variants include the short-form beaker, invented by John Joseph Griffin. It is sometimes referred to as the Griffin beaker. Mr. Griffin began his career as a publisher and seller of chemical apparatus, many of which he designed himself. He wanted to popularize Chemistry and wrote several books about it, and did much to introduce chemistry to commercial applications. As for the tall and narrow beaker, sometimes called a Berzelius beaker, it was devised by Jöns Jacob Berzeliu, who is considered a co-founder of modern Chemistry.

Emil Erlenmeyer was also a Chemist and he invented the Erlenmeyer flask. The flask is one thing, but he is also remembered, among other things, for the Erlenmeyer Rule which involves the scientific study of structure, as aficionados of Organic Chemistry know.

You need special beakers or flasks. We can do that. 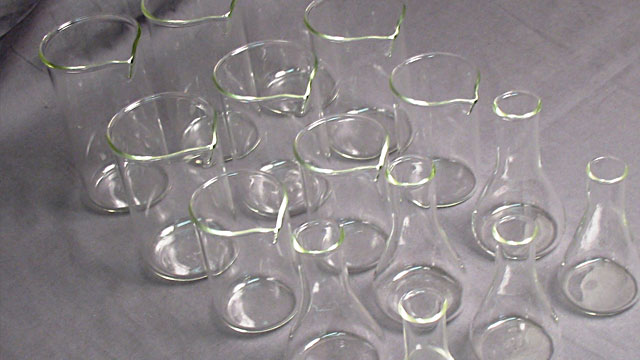